Touchdown confirmed. The #CountdownToMars is complete, but the mission is just beginning. pic.twitter.com/UvOyXQhhN9

Space Photos Of the Day

Explanation: The Rosette Nebula (aka NGC 2237) is not the only cosmic cloud of gas and dust to evoke the imagery of flowers. But it is the one most often suggested as a suitable astronomy image for Valentine’s Day. Of the many excellent Rosette Nebula pictures submitted to APOD editors, this view seemed most appropriate, with a long stem of glowing hydrogen gas in the region included in the composition. At the edge of a large molecular cloud in Monoceros, some 5,000 light years away, the petals of this rose are actually a stellar nursery whose lovely, symmetric shape is sculpted by the winds and radiation from its central cluster of hot young stars. The stars in the energetic cluster, cataloged as NGC 2244, are only a few million years old, while the central cavity in the Rosette Nebula is about 50 light-years in diameters.

This stunning image captures a small region on the edge of the inky Coalsack Nebula, or Caldwell 99. Caldwell 99 is a dark nebula — a dense cloud of interstellar dust that completely blocks out visible wavelengths of light from objects behind it. The object at the center of the image is a (much smaller) protoplanetary nebula. The protoplanetary nebula phase is a late stage in the life of a star in which it has ejected a shell of hydrogen gas and is quickly heating up. This stage only lasts for a few thousand years before the protoplanetary nebula’s central star reaches roughly 30,000 Kelvin (approximately 17,000 degrees Fahrenheit). At this point, the central star is producing enough energy to make its surrounding shell of gas glow, becoming what’s known as a planetary nebula.

Explanation: Stars can be like artists. With interstellar gas as a canvas, a massive and tumultuous Wolf-Rayet star has created the picturesque ruffled half-circular filaments called WR23, on the image left. Additionally, the winds and radiation from a small cluster of stars, NGC 3324, have sculpted a 35 light year cavity on the upper right, with its right side appearing as a recognizable face in profile. This region’s popular name is the Gabriela Mistral Nebula for the famous Chilean poet. Together, these interstellar clouds lie about 8,000 light-years away in the Great Carina Nebula, a complex stellar neighborhood harboring numerous clouds of gas and dust rich with imagination inspiring shapes. The featured telescopic view captures these nebulae’s characteristic emission from ionized sulfur, hydrogen, and oxygen atoms mapped to the red, green, and blue hues of the popular Hubble Palette.

I am so Proud to be a Space Nerd!! This Preseverance mission has been years in the making and it took this vehicle 7 months to get to Mars! 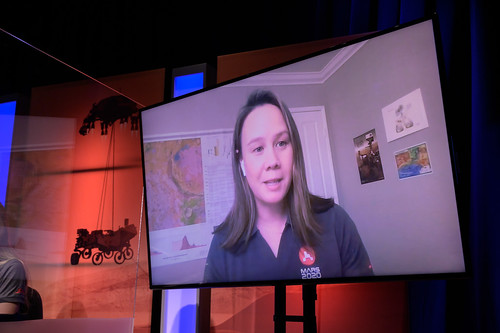 Empok Nor the twin of DS-9

Behind Deep Space 9 Voyager is one of my favorite series in the ST Verse!

This was right on time since I binged all things Borg for the ST Series!

From February 21 2021 NYTimes Book Review…Octavia Butler walked a singular path. A writer from her poverty-stricken childhood to her death in 2006 at the age of 58, she committed her life to turning speculative fiction into a home for Black expression. In her hands, the genre felt capacious and infinite. “I wrote myself in,” she told The New York Times in 2000.

Her ink was permanent. Weathering rejections, dead-end jobs and her own persistent doubts, Butler rose to international prominence. She became the first science fiction author to be granted a MacArthur fellowship, and the first Black woman to win Hugo and Nebula awards. Today her influence spans literature, genres and media.

One thought on “Over 40 and Unapologetically Nerdy…Rover Sticks the Landing, Planets As Paintbrushes, Ships of Star Trek, Resistance is Futile, ST Trivia, Highlighting SciFi Writer the late Octavia Butler”